Likewise is radical innovations forms of innovations that fundamentally changes the social systems e.g. how they work or how they interact with one another.

Likewise is the concept of innovation extremely context dependable. For one social system a particular approach could be considered an innovation where the same concept could be considered old news. Innovation, could as before mentioned, be incremental saying that a new way to deal with the piece of technology or business activity. Likewise could the same situation be radical if the technology never had been used before.

When it comes to innovation and applying it in the context of the enterprise the question of adaption would have to be dealt with.

Rogers speaks of how the innovations spreads to the various organizations, parts of the organizations and people. In this process there are five stages before the people of the enterprise would be able to fully apply any given form of innovation.

Innovation defused by that people observer other people who have success by applying the particular innovation in order to solve problems or to certain things in a new way that benefits them and their social structures.

Social systems shares a culture that is shared among the individuals who interact with the social systems. The purpose of the culture is to give the members of the enterprise a sense of security against the ever changing environment that the members of the enterprise is situated in. Culture is usually against changes and thereby against innovations. However there are also cases that suggests that culture can be used to enable the enterprise with innovation if the executives and middle management gives the employes the proper amount of trust.

It easily become a fine act of balancing between the rules, standards and principles and the necessity to crystalize solutions for the various unplanned situations that the enterprise experience. Ciborra named this the concept of bricolage (or organizational hacking). In order to facilitate bricolage it is a necessity for the decision takers to empower the employees of the enterprise by allocating power and accountability to the middle managers or the employees. As such this should give the enterprise the necessary platform in order to make bricolage works.

Innovation in this context could be facilitated by the various stakeholders of the enterprise and through the Enterprise Architecture program the concept of innovation could empower the alignment and the agility of the enterprise.

Enterprise governance has to ensure that the enterprise achieves its goals and the goals can only be achieved if there is some kind of innovation in the enterprise. Innovation should in this context be understood as an ability to alter the various parameters of the enterprise.

I’ve with some inspiration from Leavitt (1965) and his diamond model defined my own model that shows what Enterprise Architecture is all about. Enterprise Architecture is the platform for how the organization executes the business objectives, business processes and technology services. As such the holistic approach to deal with the elements of tasks, business objectives and technology services will have an impact on what kind of employees that would be needed in order to ensure that the enterprise can produce products and services to its customers. Each of the elements impacts the other elements and as such the decision makers (executives, middle managers, team leaders or anarchies) have to deal with the problems through the Enterprise Architecture platform and program. 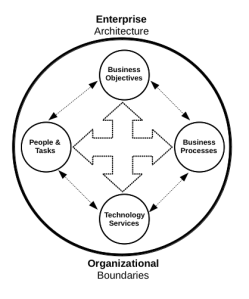 While the enterprise adds value through producing products and services to its customers. The various stakeholders in the enterprise do some kind of bricolage or organizational hacking. The concept of organizational hacking can’t be dealt with in any other way and as such most of this “hacking” helps the organization deal with the everyday crisis and as such the Enterprise Architecture program (principles, standards and security) has to take this into consideration and find the balance between hacking and standardization.

While implementing an Enterprise Architecture program the decision makers would have to ensure that incremental innovation isn’t neglected or for that matter locked due to the approach to standards and principles. Likewise should the decision makers work with the concept of bricolage in their assumptions of planning, and as such they should embrace that two, three or five year plans can’t lead to competitive advantages.

Error: Twitter did not respond. Please wait a few minutes and refresh this page.